Will Gay People and Lesbians Go To Heaven?

We all have FREEWILL! This was most of people reason out when they want to do it on their own. People was now being SELFIE or too much in love with theirself and this is the root of this topic.

When It Began?
In human history, man are loyal and always obeying what God's commanded. Until the time when satan came and bring man to the test. They eat the forbidden fruit and learn how to oppose the will of God.
Man started to become rebelious and want to do something what their ego wants to do.

If you want to enter the Kingdom of God which is in Heaven, obey what Gods will and not your freewill. Christians are under the will of God and whoever wants to become children of God must obey what God wants.
Even you say to yourself that you love God and you believe in Him and in His words, but you act differently, it is useless. Many people love God only by their mouth but not on their actions.


"These people honor me with their lips, but their hearts are far from me.
They worship me in vain; their teachings are but rules taught by men."

"Not everyone who says to me, 'Lord, Lord,' will enter the kingdom of heaven, but only he who does the will of my Father who is in heaven."


The Bible verse above clearly pinpoint that the only one who will enter the Kingdom of God is the one who is doing the will of the Father (not the free will but the will of God) and not those who just praise Gods name by their mouth.

Being unnatural (like gays and lesbians) or specials to others doesn't mean that you are going to hell, but doing what Gods forbid will bring you to death. Let us admit it, it is not natural to a guy to love a same guy and pretend to be a girl living inside a male body (lesbians feels this way also).

We can compare this kind of situations on those human with illness problem (like special kids, blinds, deaf and many more), gays and lesbians are special people and above normal to others. Yes, they have a sickness problem and we can't deny this because God made all these things and no one can stop it nor change it.

"Consider what God has done: Who can straighten what he has made crooked?"


If you think you are perfect and straight because you are a Christians does it means crooked was not made by God? God made us all and God make us all uniquely.
If you condemned these kind of people, you are also condemning the works of God. Gays and lesbians need concerns and they need guidance and inspiration to know what will they avoid and what should they do.

Back again to our questions, will homosexual go to heaven?
The question is misleading, it is more correct if we make the question like this, "who will enter the kingdom of Heaven?". Even you are a homosexual or not, there is a certain law that you must abide in order to gain a privilage from entering the Kingdom of God.

Let us make an example.
Ricky is a gay and he has a boyfriend named Shawn, they have an affair (an intimate affair with a sexual encounter). Now, is this situations are according to Gods will? Let us read what God said,

Shawn is not a gay, but is that a reason that he will not be in judgment? Or is he also committing a crime under the law of God?


Leviticus 18:22
"Do not practice homosexuality, having sex with another man as with a woman. It is a detestable sin." (NLT)


Leviticus 20:13
"If a man practices homosexuality, having sex with another man as with a woman, both men have committed a detestable act. They must both be put to death, for they are guilty of a capital offense." (NLT)


In the Bible verse above pointing out two scenarios, which involves 2 man having a homosexual affair and acting like husband and wife. We can also understand that these men talking by God can be a gay or it can be a real man doing an affair with same sex.
I just want to clear out that when it came to salvation according in the Bible, gender or appearance is not the basis of who will enter the Kingdom of God. Salvation is for those who abide God's and doing what the will of the Almighty.

Well I guess this post was long enough to make a conclusion whether a gays and lesbians will enter the kingdom of Heaven.
Thank you for reading.

I welcome every comments and opinions, so don't hesitate to write or post here, just below this article. 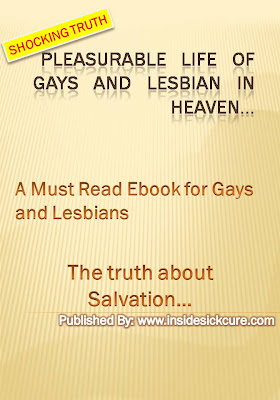 "If FAITH can move mountains and HOPE can wait forever, then CHARITY with LOVE can conquer the world." ~~~GetSickCure