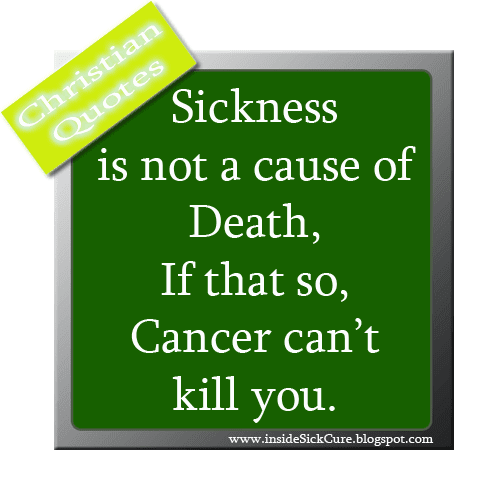 Headache, cancer, flu, fever etc., are some of the sickness you already knew, but did you know that this types of sickness will not bring you to death?

We know, that right now, something goes like this on you mind: What? Cancer will not cause death? Yes, believe it or not, but it's true.

Many cancer patients have been healed and prove that this type of sickness are not the reason why people die.


"And in those days shall men seek death, and shall not find it; and shall desire to die, and death shall flee from them."


so even you have cancer, if death will run from you, you'll never die, but pain will remain. So the cause of death is not the sickness you already know, but it is the sickness the whole world didn't know.

But before we proceed on answering the cause of death, GetSickCure wants you to know about the sickness that are not written in the book of the law or the Scripture.

"Also every sickness and every plague, which is not written in the book of this law, them will the LORD bring thee, until thou be destroyed."


Some of the sickness that were written are: consumption, fever with an inflammation, with an extreme burning, scab, itch, botch, madness, blindness, astonishment of heart.

This types of sickness are familiar to man because they often got this kind of sickness. So, the sickness that The Word said that not written on the Scripture and will going to cast out on the last days are already revealed. Some of them are: HIV AIDS, SARS, NH1N1 and so many more.

According to The Word, He will bring this sickness upon his target, until His target be destroyed. From this statement you will know that even the most dangerous sickness and the most harmful plague will not harm nor touch you.

"And the LORD will take away from these all sickness, and will put none of the evil diseases of Egypt, which thou knowest, upon thee; but will lay upon all them that hate thee."

Even death will run away from you, and this will only happen if The Word is protecting you.

Did you know now, what is the cause of death?

In the next post, we will going to discuss Sickness On Curse.

I always gave what Christians need to have. If you want something and you need an answers to your questions, you can contact me.

If you want to receive the latest update of this blog, put your e-mail below.